Phononic crystals have been studied for the past decades as a tool to control the propagation of acoustic and mechanical waves. Recently, researchers proposed that nanosized phononic crystals can also control heat conduction by phonon dispersion engineering using wave properties of phonons. In this project, we study the possiblity to use pillar-beased phononic crystals to control heat condution at nanoscale. We aim to experimentally test theoretical predictions of the thermal conductivity reduction caused by local resonances in pillars and study both coherent and incoherent types of phonon scattering caused by the pillars.

Our simulations suggest that pillars could control thermal conductance at sub-kelvin temperatures coherently, i.e. using the wave-properties of phonons. Remarkably, changing the design on the pillar array, the phononic crystal can suppress as well as enhence heat conduction. However, our experimental results so far showed that pillars affect the heat conduction only incoherently even at temperatures as low as 4 K. 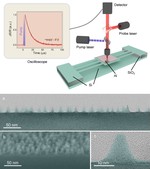 Thermal conductivity reduction in a silicon thin film with nanocones 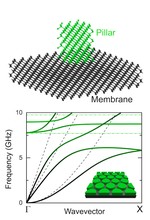